Attacks could be divided into two categories based on the way how the attack works. Passive attacks are attacks which do not modify the information or the system. Such attacks are mainly used for gathering information. Active attacks try to get access to the system so that it would be possible to affect or modify it. Thus, wiretapping is considered to be passive attack in case information is not modified due to wiretapping. However, using malware or exploiting vulnerabilities to breach / infect computer networks is considered to be an active attack method.

When people read about attacks against computer systems or about data breaches then often they think that the attacker was an evil hacker who used malicious programs or sophisticated tools in order to breach the systems or leak the data. Actually, this assumption might not be correct as the attacker looks for the weakest link in the system when planning the attack and usually the weakest link is the human. Thus, many attacks are designed to abuse the psychological weaknesses in order to gain access to information or computer systems. Attacks against the human weaknesses do not require sophisticated tools and are cheap to implement. Such attacks are classified with the term social engineering.

Social engineering uses the human weaknesses in order to get access to the desired resources. The attacker might use social engineering to get direct access to the resources, e.g., by using an employee to infect the company's inner network. However, the attacker might also get access to the resources indirectly if the employee gives out confidential information. One might think that it is difficult to get an employee to trust a stranger and therefore such attacks would be unlikely but unfortunately this is not true. A good social engineer starts by going through all of the background information about the company and its employees in order to find a good pretext or to find a weak spot in system.

Gathering information about the target

When the initial research is done then the attacker could start to use illegal means for gathering information. It might be possible to follow an employee of the targeted organization in order to collect information from phone calls or conversations. It might be possible to gather important details just by sitting next to the targeted employee in a restaurant. Another option for the attacker is to pretend to be someone else in order to gain more information about the target. However, much more information could be gathered if the attacker would be able to enter the areas of the organization that are restricted to the public. One way to get into the restricted areas is to use tailgating, i.e., to follow someone through the door. Tailgating is not allowed in many companies and this means that the employees that enter the restricted area have to always use their ID. Shoulder surfing might also work, i.e., once the attacker is able to enter the facilities it might be possible to walk around and see what can be seen from the screens of the employees. A good place for finding information is the dumpster of the organization that is being targeted. This method is called dumpster diving and this is the main reason why many companies lock their dumpsters. 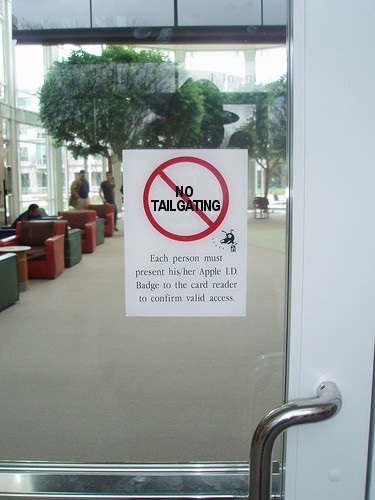 Apple has signs on the doors that prohibit tailgating, source.

Analyzing the gathered information to find a weak spot

Once the attacker has enough information about the target it is possible to start planning the real attack. The goal of an attacker might be to access some classified information or to infect a computer in the inner network in order to gain remote access. The weak point might be an employee that could be manipulated using the gathered information. However, it might be possible that the attacker has gathered enough information which allows to get access to the facilities in order to infect the inner network. For example, some companies may be less strict about checking couriers and people who do maintenance related work.

A good overview of social engineering techniques, information gathering, psychological principles and attack vectors can be found from The Social Engineering Framework.

How to protect yourself or the employees from social engineering

In addition, the organization has to have a proper security policy which specifies how the employees have to act in certain situations. Should the employees give the delivery man or service personnel access to the building and how should they determine that the person really is who he / she claims to be. The security policy also has to state who has the responsibilities and who should be contacted in case something suspicious happens.

In case of a phishing attack, the attacker tries to win his victim's trust in order to make the victim do what he wants: either click on a link, download some malicious software or give out information.

A small and simple infographic showing how a Phishing attack happens. (Original source not available anymore)

Phishing attacks are also used in Estonia. In the 2013 report by Estonian Information System Authority it was written that phishing emails were used to attack the employees of Elisa, Elion, Estonian University of Life Sciences, University of Tartu and EENet. The quality and quantity of phishing attacks has increased as reported by the corresponding reports for the following years 2014, 2015, 2017. However, the RIA report for 2018 mentioned that: "– for example, we have worked with our partners and Estonian service providers to quickly detect and take down phishing websites. As a result, the number of successful phishing incidents in Estonia has decreased significantly."