Unlike symmetric key encryption where a single key is used for both encryption and decryption, public key cryptography (PKC) uses two separate keys - a public key and a private key (the latter is also called secret key).

Private and public keys are generated in pairs and they are linked by the underlying mathematical formula. However, a public key does not reveal information about the corresponding private key and so it cannot be misused.

The security of public key cryptosystems is based on mathematical hardness assumptions. For example, the common public key cryptosystem RSA uses the assumption that large numbers are hard to factor (if they have only a few large prime factors). Cryptosystems DSA and ElGamal are based on the fact that discrete logarithms are hard to compute in cyclic groups. Public key systems based on elliptic curves (Estonian: elliptkõverad) are based on the infeasibility of division of elliptic curves over finite fields.

Table. Key length (in bits) for obtaining a required security level when using RSA, a cryptosystem based on discreet logarithm hardness assumption (DLOG) or elliptic curves (EC). The key length for symmetric cryptosystems is equivalent to the security level. Source: ECRYPT II Yearly Report on Algorithms and Keysizes, http://www.ecrypt.eu.org/

Public key cryptography is used in:

If keys are used in opposite order: private key for encryption and public key for decryption, then this is called digital signing.

As mentioned before, operations in public key cryptography, especially operations that use the private key (e.g. signing) are slow. Therefore, instead of signing the (potentially large) file, only its hash (Estonian: räsi) is signed.

A hash function (Estonian: räsifunktsioon) is a deterministic algorithm that takes an arbitrary amount of data as input and produces a fixed length output. Consequently, each possible output of a hash function can be produced by an infinite number of different inputs. It is important that similar (but still different) inputs give non-similar outputs. 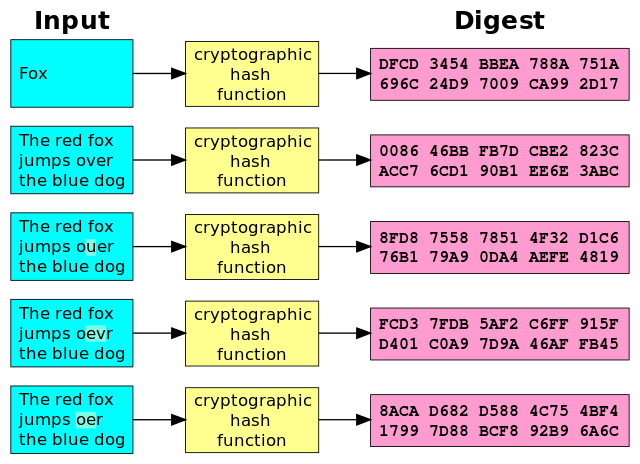 Most used hash functions are MD5, SHA-1, SHA-2 family (SHA-224, SHA-256, SHA-384, SHA-512) and SHA-3 (Keccak). However, MD5 is shown not to be collision resistant which means that it should not be used anymore for security critical tasks. It is also not recommended to use SHA-1 in newer applications as a collision was found in 2017. More info about the collision can be found in:

An example: Hash values for the input sentence "cryptographic hash function is one-way":

Quantum computers could break most of todays public key cryptography. Quantum computers use quantum effects and therefore are able to solve some computational tasks much more efficiently compared to traditional computers. E.g., integer factorization is a hard problem that is not known to be efficiently solvable on traditional computers. Such factors have to exist as all natural number bigger than one can be uniquely represented either as a prime or a multiplication of primes. This is a result of the fundamental theorem of arithmetic.

An image that shows how the number 864 can be factored / decomposed into primes. Source: Wikimedia

However, quantum computers can solve the integer factorization problem efficiently by using quantum effects. The quantum algorithm for efficiently factoring integers on quantum computers is called Shor's algorithm. It could be used to break RSA cryptosystem. However, in order to break a 2048 bit RSA key one would need a quantum computer with more than ten thousand quantum bits. This number might be significantly higher depending on the required error correction codes.

The second important algorithm for quantum computers is Grover's algorithm, which improves the speed of brute force attacks. Trying all possible combinations with this algorithm reduces the number of attempts by square root of the number of all possible combinations. For example, a 128-bit AES key could be brute forced with {$ 2^{64} $} operation by running Grover's algorithm. A 64-bit key is too weak and thus NSA suggests US government institutions to use AES with 256-bit keys. Even if powerful quantum computers would appear in the near future then they would not be able to brute force 256-bit keys. By applying Grover's algorithm the security level would be reduced to 128-bits, which is still unbreakable.

It is estimated that quantum computers will become useful in 10-30 years. Therefore, it is important to start using public key algorithms that are secure even when quantum computers emerge. This problem is discussed in the following article: The Tricky Encryption That Could Stump Quantum Computers.

In the recent years companies and universities have invested a lot of resources into developing quantum computers. IBM introduced a new quantum computer in 2017, which had 50 quantum bits. In the beginning of 2018 Google introduced a quantum computer with 72 quantum bits, which is the current record. However, these computers are not yet practical due to the amount of errors that come as a side-effect. Thus, error correcting codes have to be applied in order to get correct computation results. Unfortunately, error correction takes up a lot of quantum bits. Therefore, research is being focused on reducing the amount of errors and fixing the errors with efficient error correction codes.

Some of the most common questions regarding the usage of public key cryptography are:

This describes a common problem known as the "key exchange problem". By design, public keys are supposed to be public and available for everyone. However, how can you verify that a public key (that is technically just a bunch of numbers) you found somewhere on the internet really belongs to the person/company you think it belongs to? If attacker can substitute the real public key with his own then he can decrypt all the messages encrypted with the public key.

Now we have a new problem - anybody can take his public key and create a certificate stating that he is the president of the United States. Technically, everybody could do that, but probably nobody would believe such certificates. To make a certificate trustworthy, a trusted third party must approve that certificate. For digital certificates this trusted party is called a certification authority (CA, Estonian: sertifitseerimiskeskus) and it approves a certificate (public key + information) by signing it with its private key.

Example: The general information from the web certificate of Facebook: