We want to make SUPER HOT’s methodical combat combined with a 2D action platformer. The player has to go through various dungeons, getting useful gear on the way and preparing to raid the greatest dungeon.

All the requirements have been completed and a basic build of the game has been finished. We have one gameplay mechanic, which is slow-motion when not moving on the x-plane.

| This is the color palette we decided to use

Our second milestone went relatively well. All the requirements were completed in time, though we got some strange bugs at the end of the process which made resetting the levels difficult. In order to reset the items and enemies in a level, press the button on the top-left corner of the screen. Alteratively, you can also press escape and select the level you were at.

In this PERT chart, we decided that yellow represents Karl's tasks, blue represents Kaarel and green represents Oliver.
We didn't exactly end up following this chart, since we were often short on time and people, so we had to reassign a lot of tasks. The general idea is still the same, but Oliver ended up programming the spears and main menu instead of doing sounds. Also Kaarel has switched over to making the in-game UI and item system instead of doing much art.
Link to our PERT chart

This is a more detailed PERT chart. Here, orange represents Oliver, blue represents Karl and green represents Kaarel. The boxes themselves refer to tasks on our task spreadsheet:
https://docs.google.com/spreadsheets/d/1yAZ2iigaqfJ7l8xgdnzq6P0S-t8OGwLYdXvRwsqT6qk/edit?usp=sharing

First level:
The player enters the dungeon and then the door. It introduces the player to the control scheme and establishes the basic structure of level-to-level gameplay. The level itself is fully implemented.

Here's a screenshot of the current state of the game

Link to the milestone build

This milestone was pretty long and arduous. Things broke, there needed to be a lot of cooperation and work distribution, but we got through it. We fixed the major bugs, added a bunch of levels, new items and new hazards. We added effects, sounds, menus and other tweaks. It was nuts.

All the requirements have been met.

The guide for all the main features

The guide is in the form of symbols on the walls of the first half of the game.

1. The cards actually got in the way of the cursor. Apparently they didn't have this bug on their end, but it was nearly game-breaking. I had to move the mouse faster than the card could follow in order to click something. It required incredible finesse and one of my teammates gave up.
Fix it, please. 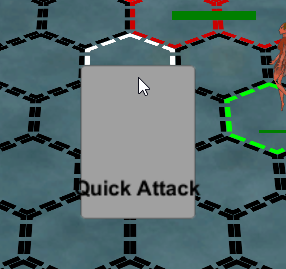 2. There is no tutorial. There has to be a tutorial. This is a card game, card games need a tutorial, despite how difficult it might be to make a concise one. Otherwise people will just be confused in the first minute and give up.

3. It would be helpful if the yellow highlight on the character who is selected also blinked. That would make it more obvious which character is selected and help figure out the game more intuitively.

4. This might be a pet peeve for a complex card game that is a school project, but characters' draw layers should be dependant on their distance. It can be a bit hard to tell what is going on at times. 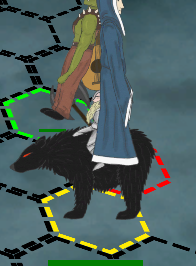 5. Some tooltips for the different stats would be helpful. For example, I have no idea what "Weight" means in the context of this game and without tooltips, I have no way to find out.