I recently acquired an Oculus Rift with Touch controllers to develop some VR games. I have not done any VR development before and as such there is a lot to learn and experiment with. The goal of this project is to get familiar with VR game development by creating a 3D stealth game. For the project, I will be using Unity 3D with the Oculus SDK along with NewtonVR, which is a free library to add simple physics interactions with the environment.

The game is inspired by games such as Superhot VR, the Hitman series and the Dishonored series. The initial gameplay is planned to contain the following features:

Hopefully by the end of this course, there will be a single but good level available.

Possible difficulties that will be encountered:

Setting up Oculus Rift with Unity was surprisingly easy, I didn't even have to install anything particular. All that was required was importing an asset package to Unity, provided by Oculus, and it all started working with the default consumer Oculus application.

Next, I played around a bit with the standard Oculus SDK and made some balls fly forward from the remotes. After that, I installed NewtonVR and messed around with it's demo scene. The demo scene used a bunch of super useful assets such as an openable door, drawers, dual wieldable objects, a gun that shot flowers for some reason and an interactable UI canvas in world space.

Next, I started the search for some models to use as enemies. I didn't feel like playing for assets and as such was hoping to find some free animated humanoids with some fighting and movement animations, which was a bit of a stretch. I found a Unity package with some animated humanoids with a bunch of fighting animations: https://www.assetstore.unity3d.com/en/#!/content/76699. I added these to the game and to make shooting them more fun, I also generated ragdolls for them, which will turn them into limp sacks when hit by a bullet. Sadly, I soon noticed that the included animations are for fighting only and there are no movement animations at all. Check it out: https://gfycat.com/EvergreenCautiousEwe

On my search for better enemies, I stumbled on the following asset package: https://www.assetstore.unity3d.com/en/#!/content/31711. It's a collection of 4 rigged bodyguards on the same skeleton. Well, that was all great, but I didn't have any animations. Almost by fate, I stumbled upon a website called www.mixamo.com, which lets you upload a rigged character and lets you apply all kinds of animations from it's database to the model for free! It was originally a paid service, but it was acquired by Adobe earlier this year who made the service free, although they also removed a lot of features and the whole old community forum for whatever reason. Well, either way I had a rigged model and over 2000 animations to choose from. I decided I will need 7 animations for now:

The next challenge was actually figuring out how to get them to work properly in Unity. This took several hours of trial and error of different mixamo export settings and Unity import settings but I finally had a simple guard with an idle animation working.

I started by generating a nav mesh for the test level and started learning how to use navmeshagents, with which I had very little experience. After a little while, I managed to have a nice little dynamic system where you can add a list of transforms to a guard and he'll walk around following the path. However, this didn't want to work very well at first and bugs were expected... https://gfycat.com/PlaintiveDeficientHogget. After some ragdolling and animation tweaks, I finally had patrolling guards who can be shot and properly ragdolled: https://gfycat.com/DisguisedPepperyJerboa.

Animating the guards was a whole another can of worms. For animating, I used the Unity's animator controller which was relatively new to me in the capacity I needed it for this project but after a while it was working pretty well for transforming between idling, walking and standing with a gun. The AI was programmed to just follow a path if there is one and if player gets inside the guard's view cone and a ray cast from guards eyes intersects the player without obstructions, the guard will turn towards the player and move to the aiming pose.

My next big goal was to try to apply inverse kinematics(IK) to the guards, otherwise they wouldn't be able to look at the player and point their gun at the player. This took a lot of work, because animations exported from Mixamo were of type 'generic', while Unity currently only supports IK on models of type humanoid. Well, our guards were humanoids and Unity offers an option to convert generic animations to humanoid animations, which I did. This however broke the animations pretty badly - the rotations were wrong and some limbs were wrongly placed and the animations looked kind of funky overall. For example, the "standing with gun" animation looked like this after the conversion: 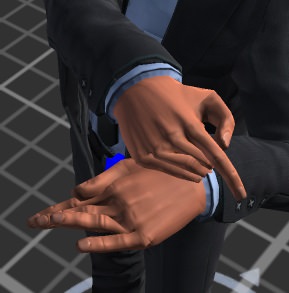 I will look into it more in milestone 3 and if nothing works, just go with generic animations with no IK.

Next, the current test scene was boring me, so I decided to brush up on my modelling skills and created a simple house and added some more barricades to the test scene. This house can be seen in the gif in the next milestone. I also sketched a few ideas for the first level of the game. It's a big backyard of a mansion with a seashore and the player has to work their way from the dock to the mansion to assassinate a target.

For a change, I spent some time sketching the first level of the game and thinking of an art style. Since this is a small game, I decided to take a minimal approach and spend less time on asset creation. Firstly, since it is a stealth game, I picked a nice looking night skybox for the level and plan on making all the gameplay take place during night. Secondly, I picked 3 main colors I will be using. They're all various shades of purple and blue and look kinda neat in my opinion. I won't upload a sketch of the first level yet, because I will hopefully have most of it modelled already by milestone 4. Meanwhile, the color scheme can be seen in the action in the gif in the last chapter!

I looked over inverse kinematics again and finally found the right Mixamo export and right Unity import settings so the animations worked some-what properly enough! I then created a system that makes the guards point directly at the player and turn their heads at the player. Here it is in action: https://gfycat.com/ComplicatedSmoggyIsabellineshrike and https://gfycat.com/MeekTornDogfish

To make enemies more interesting, I added guns to them. It is currently just a pistol parented to their hand and carefully calibrated to point at the player and play a gun shot sound when shot. The player doesn't take any damage just yet though.

For locomotion I looked around for existing solutions. It was apparent really quickly that allowing the player to move directly is a big no-no and causes a lot of motion sickness. The next clear solution was to use a teleporter like a lot of other VR games do. However, in the game you can move to high surfaces which are above yourself and out of sight. As such, just a normal point and teleport method wouldn't work, because your aim point could not be on a surface that you can not see. To solve this, I decided to use a commonly used arc teleporter which basically creates an arc to the place you want to teleport, which can also be on top of a surface you can't see. Writing this from scratch seemed pointless, because it's quite a common feature in VR games and surely there must be a solution out there. After some searching, I found VRTK, a free VR toolkit on github with a lot of different examples. However it had a big flaw - it combined like 50 different demoes and all these demos shared a lot of classes, which led to a lot of redundancy in the code and made everything about 3 times harder to understand than necessary. After a while, I was able to extract the relevant parts and wrote my own teleporter. Here it is in all it's (early) glory, including the new theme for the game: https://gfycat.com/EarlyHighlevelCalf

In the old version, the player could teleport around but the world forward axis never changed. This was problematic since while using a 180 degree VR setup it made it effectively impossible to properly turn around with proper tracking. To solve this, I added an indicator to the teleporter which can be rotated to also change the world forward, which works quite well and seemed to be intuitive enough to use.

I modelled some of the level. Here is a picture of the model from top down: 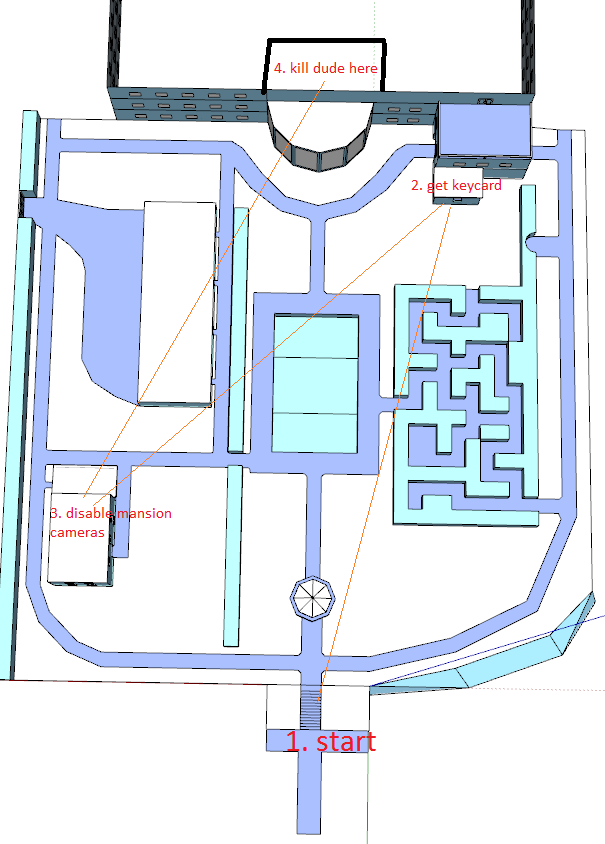 and here it is ingame: 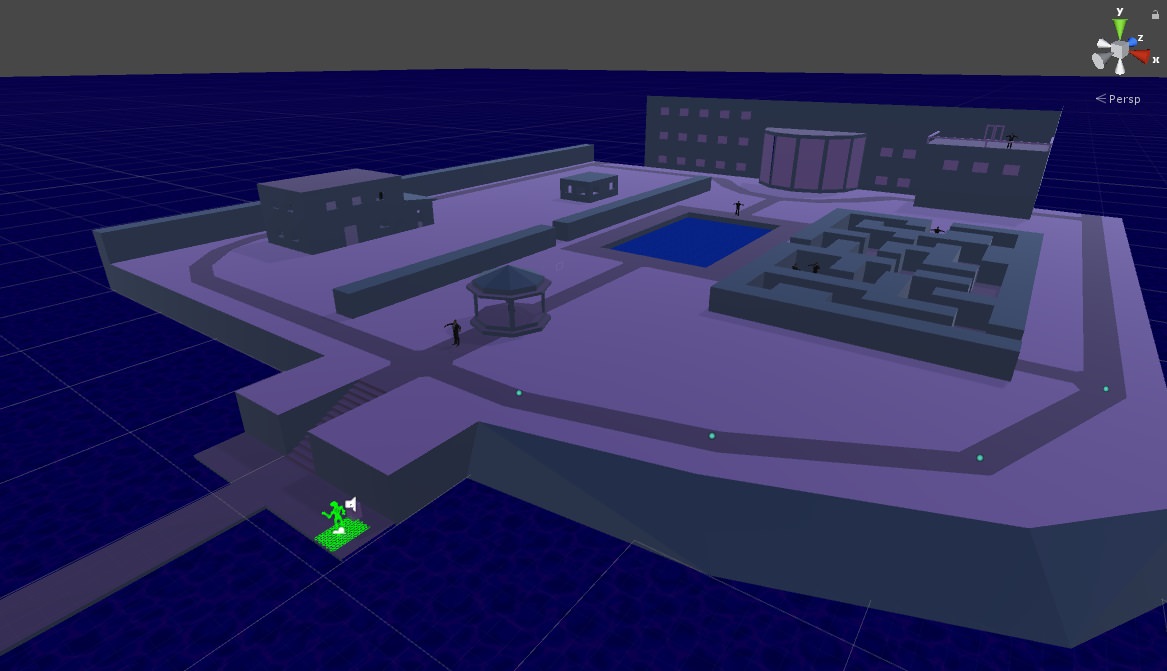 Next, I added melee combat to the game. Basically you can either punch the enemies or just throw guns at them to knock them out. A relatively simple feature but also very-very fun!

Lastly, up until this point, the player had a normal handgun, which really didn't work very well in a stealth setting. As such, I found a nice sounding silenced pistol sound, added a silencer to the pistol and now it's even more fun to shoot the bad guys.

There are no gifs in this milestone, but since I basically completed milestone 4 and 5 in a row, there is a longer video in milestone 5 that covers all the new awesome features of both milestones.

In this milestone, I worked a lot on enemy AI. Firstly, I improved the way their sight system works. For example, the enemies don't detect you instantly but require about 500ms of clear sight to notice you. Also, I integrated a lot more states to the AI compared to before (idle, casual walk, stand aiming). The new states include walking towards the player while aiming and being on alert when the player is not seen. I decided not to add running and punching yet, because walking enemies were challenging enough for a start. Next, I upgraded the enemy weapons to actual interactable objects, meaning that if the player got close enough, they could grab the weapon from the enemy and blast them with their own gun. To make enemies more aware of surroundings, enemies now react to the player moving quickly (with either hands or head) in a 1m radius and silenced gunshots in a 10m radius and normal gunshots in a 20m radius. Also, the pathfinding was upgraded in such a way that now guard paths can have stops for a certain period. There are now like 10 guards patrolling around, hoping to stop you. When the guards lose track of you, they will move to your last known position and look around, hoping to spot you.

I also added some new props to the level. But enough talk is enough, let's take a look at this in live action: 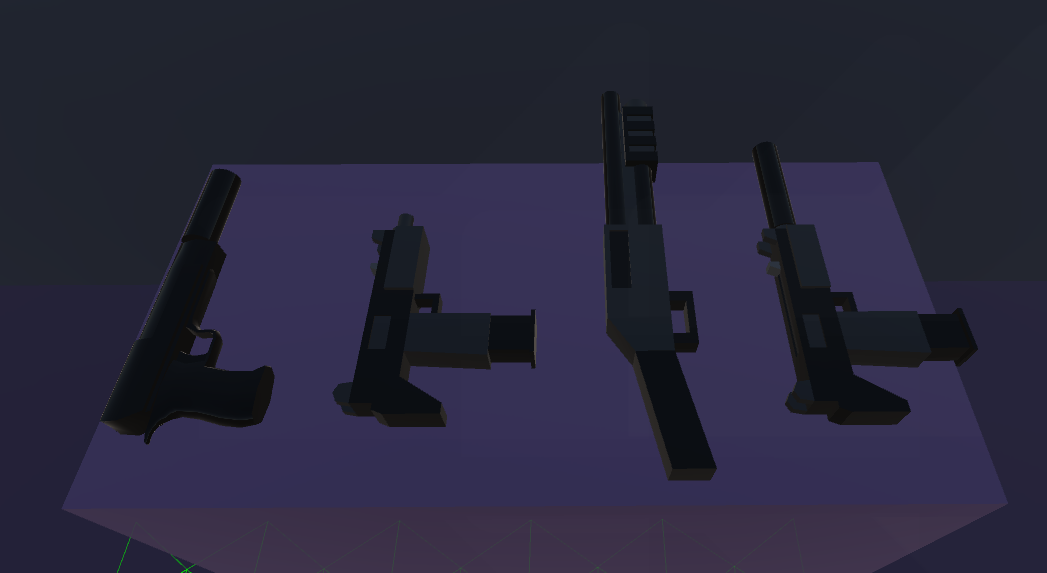